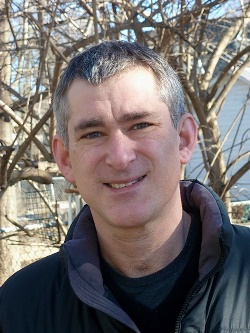 Mark Levine is the author of five books of poems, most recently Sound Fury (2022), as well as Debt (1993), Enola Gay (2000), The Wilds (2006), and Travels of Marco (2016), and a book of nonfiction reportage, F5 (2007). A twenty-fifth anniversary edition of Debt, with an introduction by Srikanth Reddy, was published in 2018. Recipient of a Whiting Writers' Award, an NEA, and a Hodder Fellowship from Princeton, Levine’s poems have be featured in anthologies including Best American Poetry, Pushcart Prize Anthology, American Hybrid: A Norton Anthology and American Poets in the Twenty-First Century: The New Poetics. Levine has also worked extensively as a long-form journalist for publications including The New York Times Magazine, The New Yorker, Outside, New York and Men’s Journal, and his work has been selected for Best American Magazine Writing and Best American Sports Writing. He is the longtime editor of the Kuhl House Poets series at University of Iowa Press.

Levine has been a member of the Workshop poetry faculty since 1999, and is committed to close textual analysis of poems; questions surrounding the construction of book-length manuscripts; and considerations of the relationships between “traditional” poetries and broader contexts, including oral and “vernacular” practices from the middle ages through hip-hop, avant-garde and alternative poetics, music, visual arts, and literary theory. In addition to workshops, his recent courses include seminars on poetic sound; poetry and film; and the sonnet tradition and its revisions. Levine is an avid proponent of gravel bike riding in Iowa.