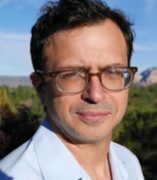 Daniel Borzutsky is the author of Lake Michigan (University of Pittsburgh Press, 2018), The Performance of Becoming Human (Brooklyn Arts Press, 2016), In the Murmurs of the Rotten Carcass Economy (Nightboat Books, 2015), Memories of my Overdevelopment (Kenning Editions, 2015), The Book of Interfering Bodies (Nightboat Books, 2011), and The Ecstasy of Capitulation (Blaze Vox Books, 2007).

Lake Michigan was a finalist for the 2019 Griffin International Poetry Prize, and The Performance of Becoming Human received the 2016 National Book Award. Borzutsky’s translation of Galo Ghigliotto’s Valdivia received the 2017 ALTA National Translation Award. He also translated Raul Zurita’s The Country of Planks and Song for his Disappeared Love, and Jaime Luis Huenún’s Port Trakl.

Borzutsky’s work has been recognized with grants from the National Endowment for the Arts, the PEN/Heim Translation Fund, and the Illinois Arts Council. Since 2017, he has been an editor at Kenning Editions and has overseen the publication of new translations from Cuba and Argentina. He also serves as the Intercambio (Spanish-translation) poetry editor at Chicago’s MAKE Magazine and he is an artistic director for MAKE’s Lit and Luz Festival, an ongoing collaboration between writers and artists from Chicago and Mexico. He teaches in the English and Latin American and Latino Studies Departments at the University of Illinois at Chicago.