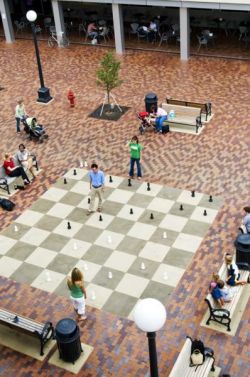 A view of the Ped Mall in downtown Iowa City

A UNESCO designated "City of Literature," Iowa City has been home to thousands of writers in the last few decades. Writers say it's a great place to work - small enough to provide an intimate sense of community and a relatively simple, inexpensive lifestyle, yet cosmopolitan enough to offer the culture and convenience of a bigger city.

Iowa City is a town of just over 65,000 people, approximately half of them students. Downtown Iowa City is home to a variety of restaurants, shops, book stores, and the Iowa City Public Library. From May to October, there are farmers markets in both Iowa City and Coralville, and there's an excellent natural food co-op.

The closest airport to Iowa City is the Eastern Iowa Regional Airport (CID) in Cedar Rapids, IA, although some choose to fly from the Quad Cities International Airport (MLI) in Moline, IL, which is about an hour's drive away.