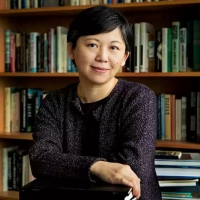 Yiyun Li (MFA, 2005) has won a Windham-Campbell Prize in fiction.

From the 2020 Windham-Campell Prize winners announcement:

Yiyun Li masterfully explores the landscape of loss with delicacy and precision, restoring the fractured lives of ordinary people on the margins, endowing them with agency and power.

Born in Beijing, China, Yiyun Li is the author of four novels, two short story collections, and a memoir. Li started writing in English in her twenties, and from the beginning of her career her work has earned praise for its formal beauty, imaginative daring, and intense interest in both the small flames of ordinary lives and the sweeping fires of political and social change. Her first novel, The Vagrants (2007), paints a portrait of a provincial Chinese town at a moment of crisis, with a young woman about to be executed as a counter-revolutionary. In recent years, she has continued to write about the complex and often difficult relationship between personal freedom and political agency. Kinder Than Solitude (2014) follows a group of friends after the Tiananmen Square protests; Dear Friend, from My Life I Write to You in Your Life (2017), an essay collection, is both an examination of the exterior forces that power Li’s writing—literary, personal, and political—and an interrogation of selfhood. In all her work, Li displays a piercing clarity of vision, and a committed, sometimes painful empathy for individuals and for the fragile bonds between them. A former fellow of the MacArthur (2010) and Whiting (2006) Foundations, among many other honors, Li is a professor of Creative Writing at Princeton University. Her work has been translated into more than twenty languages.

Donald Windham-Sandy M. Campbell Literature Prizes have been awarded at Yale University since March of 2013. The mission of the prizes is "to call attention to literary achievement and provide writers with the opportunity to focus on their work independent of financial concerns." Winners of the Literature Prizes receive an unrestricted grant of $165,000 to support their writing. The prizes were created by Donald Windham in memory of his lifelong partner, Sandy M. Campbell.