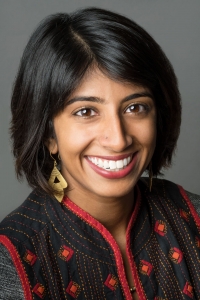 Sanjena Anshu Sathian, who will be a student in the Iowa Writers’ Workshop starting in the fall 2017 semester, was named a 2017 Paul & Daisy Soros Fellow for New Americans.

The daughter of Indian immigrants and raised in Georgia, Sathian earned her BA in English from Yale University and worked as a journalist for The Boston Globe and OZY, a media start-up. She has investigated and written about striking Chilean miners, the ethical implications of artificial intelligence, the rise of Hindu nationalism, and celebrity-worship culture, among other topics.

“I first heard of the Iowa Writers’ Workshop when my favorite high school English teacher lectured on Wise Blood, by Flannery O’Connor,” says Sathian. “After that, it always hung around in my mind as a vague dream—nothing I ever truly thought I’d live out. I’m excited about being around professors and peers who share some of my literary preoccupations, and about letting my work grow in the company of other writers.”

Sathian was one of 1,775 applicants and 30 individuals awarded the fellowship this year. To qualify, applicants must either be an immigrant, or the child of immigrants, pursuing graduate education in the U.S. with the potential to make significant contributions to American society and culture, or to their academic fields.