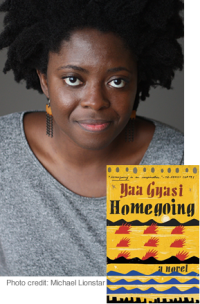 The National Book Critics Circle announced the finalists for their 2016 awards for literature, and Workshop writers Yaa Gyasi, Adam Haslett, Peter Orner, Ann Patchett and John Edgar Wideman were among the writers whose work was selected for distinction.

Recent Workshop graduate Yaa Gyasi's debut novel, Homegoing,  was awarded the fourth annual John Leonard Prize, established to recognize outstanding first books in any genre. In the fall, Gyasi was selected for the National Book Foundation's 2016 list of "5 Under 35," which honors emerging writers.

Peter Orner's book, Am I Alone Here? Notes on Living to Read and Reading to Live, was selected as a finalist for the award for criticism. For the award for fiction, Ann Patchett was nominated for her novel, Commonwealth, and Adam Haslett for his novel, Imagine Me Gone.

John Edgar Wideman, who was a fellow at the Writers' Workshop from 1966 to 1967, was nominated as a finalist for the award for general nonfiction, for his book, Writing to Save a Life: The Louis Till File.