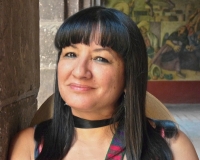 On September 22, President Obama will award a 2015 National Medal of Arts to author Sandra Cisneros, in a ceremony at the White House recognizing contributors of the arts and humanities.

Sandra Cisneros will be honored "for enriching the American narrative. Through her novels, short stories, and poetry, she explores issues of race, class, and gender through the lives of ordinary people straddling multiple cultures. As an educator, she has deepened our understanding of American identity."

Sandra Cisneros is a poet, fiction writer, and essayist whose work explores the lives of the working-class. She is well-known for her groundbreaking debut novel, The House on Mango Street, and for her other books, which include Woman Hollering Creek and Other Stories, the poetry collection, Loose Woman, the novel, Caramelo,  and her most recent book, A House Of My Own: Stories from My Life, which was just awarded the prestigious PEN Center 2016 Literary Award. Cisneros is a graduate of the Iowa Writers' Workshop.

The event will be live-streamed, at www.whitehouse.gov/live.