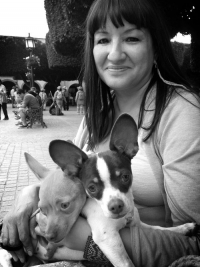 Sandra Cisneros (MFA, 1978) received the 2019 PEN/Nabokov Award for Achievement in International Literature at a February 26 ceremony in New York, NY.

Sandra Cisneros is an activist, poet, short story writer, novelist, essayist, and artist. Her classic coming-of-age novel, The House on Mango Street, has sold over six million copies, has been translated into more than twenty languages, and is required reading in elementary, high school, and university curricula across the U.S. Her numerous awards include NEA fellowships in both poetry and prose, the Texas Medal of the Arts, a MacArthur Fellowship, several honorary degrees, national and international book awards, Chicago's Fifth Star Award, the PEN Center USA Literary Award and the National Medal of Arts presented to her by then-President Barack Obama at the White House.

From the judges’ citation:

“Sandra Cisneros has said that she writes because ‘the world we live in is a house on fire and the people we love are burning.’ In a formidable and awe-inspiring body of work, which includes fiction, memoir, and poetry, Cisneros brings us astounding and lyrical voices from burning, maligned, devastated, as well as reassembled houses, and nations. It’s hard to imagine navigating our world today without her stories and her voice guiding us towards needed much reclamation and endurance.”