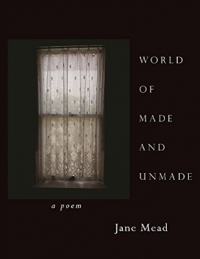 World of Made and Unmade, by Jane Mead

The National Book Foundation announced its longlist for the 2016 Award in Poetry, and three of the ten books selected were written by Writers' Workshop alumni: Collected Poems 1974-2004, by Rita Dove, The Abridged History of Rainfall, by Jay Hopler, and World of Made and Unmade, by Jane Mead.

World of Made and Unmade is Jane Mead's fifth collection of poetry. Mead is teaching at the Workshop this semester as Visiting Professor, and she will be giving a reading, with faculty member James Galvin, tomorrow night. In their citation for the book, the National Book Award Judges wrote, "These resonant poems discover what it means to live, die, and come home again. We're drawn in by sorrow and grief, but also the joys of celebrating a long life and how simple it is to find laughter and light in the quietest and darkest of moments."

Rita Dove's Collected Poems 1974-2004 holds "three decades of powerful lyric poetry from a virtuoso of the English language in one unabridged volume," a book, the National Book Award Judges wrote in their citation, that "showcases the wide-ranging diversity that earned her a Pulitzer Prize, the position of U.S. Poet Laureate, a National Humanities Medal, and a National Medal of Art."

Rita Dove will be the Jonathan C. Goldsmith Visiting Author at the Iowa Writers' Workshop for 2016–2017, with a reading on October 20, and a Q&A on October 21.

The Abridged History of Rainfall is Jay Hopler's second book of poetry, and will be published by McSweeney's in November, 2016. The judges's citation describes the book as  "an elegy of uproar, a careening hymn to disaster and its aftermath. In lyric poems by turns droll and desolate, Hopler documents the struggle to live in the face of great loss, a task that sends him ranging through Florida's torrid subtropics, the mountains of the American West, the streets of Rome, and the Umbrian countryside. Vivid, dynamic, unrestrained: The Abridged History of Rainfall is a festival of glowing saints and fighting cocks, of firebombs and birdsong."