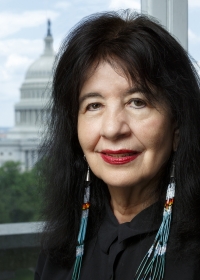 Librarian of Congress Carla Hayden today announced the appointment of Joy Harjo, Iowa Writers’ Workshop alumna, as the nation’s 23rd Poet Laureate Consultant in Poetry for 2019-2020. Harjo will take up her duties in the fall, opening the Library’s annual literary season on Sept. 19 with a reading of her work in the Coolidge Auditorium.

Harjo is the first Native American poet to serve in the position – she is an enrolled member of the Muscogee Creek Nation. She succeeds Tracy K. Smith, who served two terms as laureate.

“Joy Harjo has championed the art of poetry – ‘soul talk’ as she calls it – for over four decades,” Hayden said. “To her, poems are ‘carriers of dreams, knowledge and wisdom,’ and through them she tells an American story of tradition and loss, reckoning and myth-making. Her work powerfully connects us to the earth and the spiritual world with direct, inventive lyricism that helps us reimagine who we are.”

Harjo currently lives in her hometown of Tulsa, Oklahoma, and is the nation’s first Poet Laureate from Oklahoma.

“What a tremendous honor it is to be named the U.S. Poet Laureate,” Harjo said. “I share this honor with ancestors and teachers who inspired in me a love of poetry, who taught that words are powerful and can make change when understanding appears impossible, and how time and timelessness can live together within a poem. I count among these ancestors and teachers my Muscogee Creek people, the librarians who opened so many doors for all of us, and the original poets of the indigenous tribal nations of these lands, who were joined by diverse peoples from nations all over the world to make this country and this country’s poetry.”

Born in Tulsa, Oklahoma, on May 9, 1951, Joy Harjo is the author of eight books of poetry – including Conflict Resolution for Holy Beings (W. W. Norton, 2015); The Woman Who Fell From the Sky (W. W. Norton, 1994), which received the Oklahoma Book Arts Award; and In Mad Love and War (Wesleyan University Press, 1990), which received an American Book Award and the Delmore Schwartz Memorial Award. Her next book of poems, An American Sunrise, will be published by W.W. Norton in fall 2019. Harjo has also written a memoir, Crazy Brave (W.W. Norton, 2012), which won the 2013 PEN Center USA literary prize for creative nonfiction, as well as a children’s book, The Good Luck Cat (Harcourt, Brace 2000) and a young adult book, For a Girl Becoming (University of Arizona Press, 2009).

As a performer, Harjo has appeared on HBO’s 'Def Poetry Jam' and in venues across the U.S. and internationally. In addition to her poetry, Harjo is a musician. She plays saxophone with her band, the Arrow Dynamics Band, and previously with Poetic Justice, and has released four award-winning CDs of original music. In 2009, she won a Native American Music Award (NAMMY) for Best Female Artist of the Year.

Harjo’s many literary awards include the PEN Open Book Award, the American Indian Distinguished Achievement in the Arts Award, the New Mexico Governor’s Award for Excellence in the Arts and the Arrell Gibson Lifetime Achievement Award from the Oklahoma Center for the Book. Harjo has received fellowships from the Guggenheim Foundation, the Witter Bynner Foundation, and the National Endowment for the Arts. Her collection How We Become Human: New and Selected Poems 1975-2001 (W.W. Norton, 2002) was selected by the National Endowment for the Arts for its Big Read program. Her recent honors include the Jackson Prize from Poets & Writers (2019), the Ruth Lilly Poetry Prize from the Poetry Foundation (2017) and the Wallace Stevens Award from the Academy of American Poets (2015). In 2019, she was elected a Chancellor of the Academy of American Poets.

Harjo has taught at UCLA and was until recently a professor and chair of excellence at the University of Tennessee, Knoxville. She has returned to her hometown where she holds a Tulsa Artist Fellowship.

During his or her term, the Poet Laureate seeks to raise the national consciousness to a greater appreciation of the reading and writing of poetry. The Library keeps to a minimum the specific duties required of the Poet Laureate, who opens the literary season in the fall and closes it in the spring. In recent years, Laureates have initiated poetry projects that broaden the audiences for poetry.

For more information on the Poet Laureate and the Poetry and Literature Center, visit loc.gov/poetry.