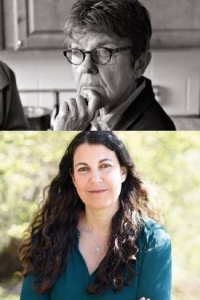 The Truman Capote Award Ceremony will take place at 4 p.m. Sept. 14 in the Old Capitol Senate Chamber. The event will feature remarks by Heather Clark and a reception in the Old Capitol Museum. Both events are open to the public.

Former U.S. Poet Laureate Kay Ryan won the 2021 Truman Capote Award for Literary Criticism in Memory of Newton Arvin for her book, Synthesizing Gravity: Selected Prose, released by Grove Press in 2021, and Heather Clark won the 2022 award for her book Red Comet: The Short Life and Blazing Art of Sylvia Plath, released by Alfred A. Knopf in 2020. Due to complications related to the COVID-19 pandemic, the 2021 Truman Capote Award announcement and celebration were postponed one year.

“It means so much to me to win this award, especially as a writer of biography — a genre sometimes met with hostility within academia,” says Clark. “When I was in graduate school, much of the literary theory that dominated English literature departments left me cold. The sentences were dense and gnarled, the ideas grand but illusory. I was more interested in literary influence, and felt then, as I still feel, that biography offers compelling insights into a literary work. Biography is a legitimate form of literary criticism. For me, this prize validates not just my biography, but the genre itself.”

Clark, who lives in New York, is Professor of Contemporary Poetry at the University of Huddersfield in Yorkshire, England and a 2022-23 Guggenheim Fellow. She has received a National Endowment for the Humanities Public Scholar Fellowship, a Leon Levy Biography Fellowship at the City University of New York, and a Visiting U.S. Fellowship at the Eccles Centre for American Studies, British library, and she is a former Visiting Scholar at the Oxford Centre for Life-Writing. Red Comet is Clark’s third book and follows her second, The Grief of Influence: Sylvia Plath and Ted Hughes.

Red Comet was a finalist for the Pulitzer Prize, the National Book Critics Circle Award, and the LA Times Book Prize in Biography. The New York Times named it one of the top ten books of 2021, and several publications marked it as a book of the year, including the Boston Globe, Literary Hub, The Times (London), The Times of India, The Daily Telegraph, The Guardian, Entertainment Weekly, and O, the Oprah Magazine. It also won the Slightly Foxed Prize for Best First Biography.

The book draws from recently released, unpublished material concerning Plath’s life and is over 1000 pages long. The Los Angeles Times named Red Comet the “definitive new biography” of Plath. Emily van Duyne, writing for LitHub, calls it “the most comprehensive Plath biography on record.” Daphne Merkin, writing for the New York Times, notes that despite the book’s “scrupulously researched, tirelessly detailed account” there is no denying it’s “sheer readability.” Contributing to this impression is the book’s inclusion of minor though illustrative details, such as how much money was in Plath’s bank account when she died (59 pounds), and the fact that as she lay dying on the floor of her kitchen the sun shone through the window and flooded the space with light.

Clark says she wanted to “free” Plath from mischaracterization and cultural baggage that has accumulated around the iconic poet. This motivation echoes that of her previous books and her current focus — a group biography similar to her first book, The Ulster Renaissance: Poetry in Belfast 1962–1972 — which will examine Plath, Anne Sexton, Adrienne Rich, and Maxine Kumin during the 1950’s in Boston, Massachusetts. She is also working on a new biography of Anne Sexton.

“These women helped change American poetry — and culture,” says Clark, “but their collective achievement has been overlooked. I suppose all of my books try to make larger cultural claims even as they focus on individual lives. I believe that life-writing, when done well, is culturally conscious.”

Several cultural and geographic similarities exist between Clark and Plath, which she says also informed the book. “We were both born and raised in Massachusetts, both ‘scholarship girls’ (I am a first-generation college student), both educated at Oxbridge, and both mother-writers,” she says. “I know what it’s like to work yourself to the bone to maintain your scholarship; to feel homesick during a cold British winter; to write before your children wake up. Those points of connection were important to me, though one need not possess such connections to one’s subject.”

In an interview with Slate in 2021, Clark notes that her approach to literary criticism is inspired by Hermione Lee, whose biographies of women writers with mental illness, such as Virginia Woolf, treat their subjects as professional writers first rather than “psychological victims.”

Clark also takes inspiration from Seamus Heaney (another Truman Capote Award winner), saying that he “provided a model of writing about writers that inspired me to try to approach literary criticism in a more biographical and historical way. I still feel that Heaney’s literary criticism is almost without rival.”

The biographical and historical consciousness of Clark’s writing extends to her views on career options for writers and contemporary literary criticism, some of the best of which she finds in literary magazines and biographies rather than academic journals or monographs, whose “overuse of jargon tends to obfuscate meaning.”

“When I graduated from Harvard in 1996, I wanted desperately to apply to MFA programs in creative writing,” says Clark. “But I had student loans to repay and thought that getting a PhD in English would offer me a more steady income as a professor. Today, I would probably not make the same calculation. Tenure-track positions in the field of English literature are nearly non-existent. Adjunct work is exploitative and demoralizing. Those who possess the writing and analytical skills to pursue a PhD in literary studies are now perhaps better off getting an MFA and pursuing a freelance writing career. My guess is that literary criticism will flourish as a result.”

In 1996, as Clark was choosing between a PhD and MFA, Kay Ryan, the 2021 winner of the Truman Capote Award for Synthesizing Gravity, was receiving wide attention at the age of 51 for her third book of poetry, Elephant Rocks. Fourteen years later she would receive the Pulitzer Prize in Poetry for her eighth book, The Best of It: New and Selected Poems.

Although she once carried a reputation as an “outsider,” Ryan has received several major awards, including fellowships from the John D. and Catherine T. MacArthur Foundation, the National Endowment for the Arts, the Ingram Merrill Foundation, and the Guggenheim Foundation. She has received the Union League Poetry Prize and the Maurice English Poetry Award, the Ruth Lilly Poetry Prize, and three Pushcart Prizes. In 2006, she was elected a Chancellor of the Academy of American Poets. Her work has been selected four times for The Best American Poetry and was included in The Best of the Best American Poetry 1988-1997.  Entertainment Weekly named her to the “It List.”

In 2008, she accepted appointment as the Library of Congress's sixteenth Poet Laureate Consultant in Poetry. She held the position for two terms, using it to champion community colleges like the one in Marin County, California where she and her partner Carol Adair taught for over thirty years.

“Winning the Capote Award put me into the company of giants, where I always want to be,” says Ryan with the verve typical of her writing. “I don’t mind being the smallest giant, comical by giant standards, but I only like their company. They are so easygoing, secure in their immortality and generous about sharing the remote end of the high table. George Steiner, for example, is not troubled by my name on a place card but continues on with his Mittle-European elegance of mind and table manners.”

Synthesizing Gravity draws from thirty years of Ryan’s published prose and is the first such collection. Reviewers have made much of Ryan’s poetic and prose writing styles. Matthew Bevis, writing for the New York Review of Books, calls Ryan’s essays so “deliriously good” that they’re “on their way to poetry.” David Or, writing for the New York Times, says that Ryan has “all the critic’s skills, but this isn’t a critic’s book,” and calls the book “a delight, if a tart and idiosyncratic one.” By way of example, he includes a quote: “There is always a feral scent to Annie Dillard’s writing, and always a little spatter of blood — from birth, the kill, the dissection, the thorn of the rose.”

Ryan sees her prose as “high-level, brainy essays about aesthetics,” but like Clark’s Red Comet she preserves accessibility. She says, “I think things can be done at a very brainy level while still being intermittently demotic.” In a 2008 Paris Review interview with Sarah Fay, Ryan describes her technique as “something like using a hammer to drive a needle through silk.”

In addition to earning her praise, this aesthetic has served Ryan during the decades she taught remedial English at community college, the effect of which she describes as “heightening the disinclination to snobbery and sharpening the sword blade of metaphor. You are always desperate to find a way to get your lesson across in the most compelling — least boring — way. That means a lot of car metaphors, maybe some tattoo metaphors. Really, you’d kill cats (metaphorically) to explain subject/verb agreement.

In the introduction to the collection, Christian Wiman says that the book will make readers wonder if prose and poetry are truly distinct, though Ryan notes that prose writing is different for her in its inception, execution, and experience.

“If Philip Larkin had not titled his single critical book Required Writing I would have snapped up the name,” says Ryan. “Nearly all the prose I’ve written was at someone’s request. That is, I have been at pains to satisfy some external requirement. This is its central distinction from my poetry. Poems are inimical to requirement. I have found patches of mental freedom inside the constraints of requirement, certainly. But in prose I have the feeling of trying to fit myself into a set of conventions while in poetry the conventions just fit.”

Ryan adds that working on prose provides “certain satisfactions that the lonely freedoms of poetry could not.” Working on a book review meant she could commiserate with others whose work was similarly constrained. “It was talk-about-able, sociable.”

“I missed this in the aftermath of my real work, writing poems,” she says. “There was nothing to say. I didn’t want advice or help or commiseration. Plus poems got written so intermittently and quickly that they just didn’t fit the patterns of work.”

Synthesizing Gravity and Red Comet were chosen for the Truman Capote Award by a panel of six prominent critics and writers, each of whom nominated two texts. Books of general literary criticism in English published during the last four years are eligible for nomination. After reading all the nominated books, each panel member ranked the nominees.

PAST WINNERS OF THE CAPOTE AWARD: