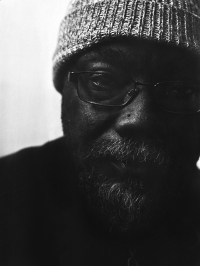 The Truman Capote Award Ceremony took place online on Thursday, October 8 over Zoom. The event featured remarks by Fred Moten and an introduction by Elizabeth Willis. To view the recording, please visit, https://mediaspace.uiowa.edu/media/Truman+Capote+Award+%282020%29+--+Fred+Moten/1_g1r7jmbr?st=6

Fred Moten won the 2020 Truman Capote Award for Literary Criticism in Memory of Newton Arvin for his book, Black and Blur, released by Duke University Press in 2017.

Moten is a professor of Performance Studies at New York University and was recently awarded a MacArthur “genius” Grant for his pioneering work in critical theory and poetry, which articulates Black Studies as a way of living and as a radical reimagining of resistance and struggle against normative structures. His first book, In the Break: The Aesthetics of the Black Radical Tradition (Minnesota University Press, 2003), widely considered to be one of the foundational modern texts of Black Studies, helped to establish Moten’s career-long, wide-ranging exploration of Black radical thought. Moten’s poetry carries the same level of interdisciplinary thinking and embodies his commitment to writing and art as a space for Black resistance and a space to think imaginatively about societal life and collaborative work. Moten’s poetry publications include The Service Porch (Letter Machine Editions, 2016), The Little Edges (Wesleyan University Press 2014), and The Feel Trio (Letter Machine Editions, 2014), which was awarded the Los Angeles Times Book Prize, and was a finalist for the Pulitzer Prize and the National Book Award.

Reviewing Black and Blur for the 4Columns website, fellow poet and scholar Maggie Nelson writes "Simply put, Moten is offering up some of the most affecting, most useful, theoretical thinking that exists on the planet today.... Moten’s work makes the activities of reading and thinking feel palpably fresh, weird, and vital." Black and Blur is the first book in a trilogy called consent not to be a single being, which interrogates the entangled notions of sovereignty, philosophy, art, and social life. Moten situates the efforts of Black artists and thinkers within a longstanding insurgency that responds to, reacts against, and engages with the catastrophe of modernity.

According to Moten, “We’re living in the midst of a long war of conquest, which in this hemisphere is five hundred years old. The modalities within which that war has been lived, the protocols by way of which it has been prosecuted are genocide, removal, displacement, through the infernal mechanisms of trade and the plantation and industrialized forms of brutality. That’s the basic structure of the past five hundred years on these shores. At the same time, not just coterminous with that war but I believe prior to that war, there was already resistance to it, that in a certain sense anticipated it. That resistance is part of the ongoing de-structuring of that war on conquest […] Most of us, we’re trying to figure out how to survive it. I study the aesthetic and social practices of the folks that are trying to survive it.”

So much of Moten’s work is invested in an idea of sociality, in collaboration, as a moral and methodological approach to the dismantling of white supremacist and fascist state structures. Under Moten’s conception of sociality, reading and writing become part of a long tradition of radical politics and intertextual study that recognizes literature and art as a necessarily polyvocal tradition based on collaborative work.

“Everything that I grew up around was collaborative. There was no single figure in my life who wasn’t striated and multiplied,” says Moten. “The Black social life that I was brought up in was always what Karen Barad would call an experiment in metaphysics. It was never about the simple interplay between the one and the many. It was neither one nor many – that was constantly being practiced and enacted and preserved […] I don’t know that there’s anything else other than collaboration. If people could stop deluding themselves that they’re ever doing anything on their own, that would be great.”

Throughout his poetry and critical writing, the ideas and voices of his friends, collaborators, and artistic heroes bubble to the surface. In a Moten book, you’re as likely to encounter Ol’ Dirty Bastard or Curtis Mayfield as you are critical theorists like Fanon or Adorno. In The Undercommons: Fugitive Planning and Black Study, a book Moten co-authored with longtime collaborator Stefano Harvey, the duo work to explore and articulate a fugitive way of living, one that undermines and works against normalized ideas of society and governance.

“What Stefano Harvey and I have been trying to do together for forty years, almost, is to try to understand and think about the alternative, in all of its complexity and richness and internal differentiation,” Moten observes.

Black and Blur was chosen for the Truman Capote Award by an international panel of six prominent critics and writers, each of whom nominated two texts. Books of general literary criticism in English published during the last four years are eligible for nomination. After reading all the nominated books, each panel member ranked the nominees.

“So much of the work that has been most important to me, that I’ve been involved in both as a practitioner and as a critic has been engaged with queer artists and queer writers,” Moten says. “To be involved in even the most minimal way in the ongoing refusal of the brutalities of homophobia, transphobia, and the indignities of sexual normativity… that’s an important thing. I want always to strive to contribute to that project. To get this award that’s in Capote’s name and in honor of Newton Arvin means a lot to me.“