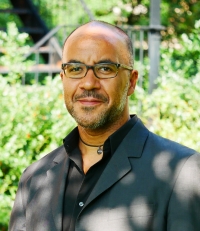 The Truman Capote Award Ceremony will take place at 4 p.m. Oct. 16 in the Old Capitol Senate Chamber. The event will feature remarks by Brent Hayes Edwards and a reception in the Old Capitol Museum. Both events are open to the public.

Brent Hayes Edwards won the 2019 Truman Capote Award for Literary Criticism in Memory of Newton Arvin for his book, Epistrophies: Jazz and the Literary Imagination, released by Harvard University Press in 2017.

“I am honored to be linked, even in such a peripheral way, with the legacy of one of the great queer iconoclast American writers of the past century, an artist who from the beginning of his career exploded the putative boundaries between literary genres,” says Edwards. “I’m also moved to know that Capote was motivated to start the prize out of his concern for the future of literary criticism — there’s something poignant and unique in the fact that the award was founded as a hugely popular creative writer’s way of insisting on, and celebrating, the importance of scholarship.”

Edwards is a professor of comparative literature at Columbia University and is widely recognized for his groundbreaking scholarship on cultures of the African diaspora. His first book, The Practice of Diaspora: Literature, Translation, and the Rise of Black Internationalism, was published by Harvard University Press in 2003 and received the John Hope Franklin Prize of the American Studies Association, the Gilbert Chinard Prize of the Society for French Historical Studies, and runner-up for the James Russell Lowell Prize of the Modern Language Association. A former co-editor of the journal Social Text, Edwards has edited five books (including scholarly editions of classic works by W. E. B. Du Bois, Joseph Conrad, and Claude McKay), and serves as the Harlem Renaissance period editor of the Norton Anthology of African American Literature. In addition to the Truman Capote Award, Epistrophies, Edwards’ second monograph, received the 2018 ASCAP Foundation Virgil Thomson Award for Outstanding Music Criticism in the pop music field.

Edwards is currently on leave and is helping the Pulitzer Prize-winning composer Henry Threadgill complete an autobiography, among multiple other book projects.

A core faculty member of the interdisciplinary Center for Jazz Studies at Columbia, Edwards has for many years been deeply involved with scholarship on black music. Epistrophies grew directly out of Edwards’s work in the field, incubated especially in the lecture class “Jazz and the Literary Imagination” he has been teaching for more than a decade.

“Some books are born quickly,” says Edwards. “But Epistrophies came slowly, as I kept revisiting the class year after year. The book took shape not according to a pre-conceived plan but archive by archive, as I came across bodies of documentation about particular artists that allowed me to think about the relationship between music and writing in black culture.”

“Edwards aims not just to hear, but to read, write, and think across a range of radically different sources,” writes Colin Vanderburg when reviewing Epistrophies for the Los Angeles Review of Books in 2018. “… He aims to expand the domain of ‘jazz literature’ beyond poetry and fiction ‘influenced by music,’ surveying what he calls the genre’s ‘ancillary’ texts, including letters, dairies, interviews, liner notes, and more, with a focus on writings by musicians themselves.”

“More than mere virtuoso feats of archival hermeneutics, passages like these say something surprising and new that no one else has, or can, about two revered musicians — a genuine rarity in jazz scholarship,” Vanderburg writes.

Edwards’ understanding of the interrelations among art forms is informed by his own experience studying music and performing as a dancer and choreographer. He studied piano and trombone as a child and took courses in music theory and composition as an undergraduate at Yale. While he was in college, Edwards also joined a modern dance company in New Haven. In the early 1990s, after he received an MA and before completing a PhD in English and Comparative Literature at Columbia, Edwards co-directed, choreographed, and danced in the collaborative dance company 8 Lives Dance Collective. The company performed between 1992 and 1996 at venues including the Merce Cunningham Studio, Context Studio, and Jacob’s Pillow, but the logistical demands of both conducting dissertation research and maintaining a performance-ready body proved mutually exclusive.

While he no longer regularly performs, Edwards says he misses it and fondly remembers a recent collaborative lecture-performance he created with choreographers Emily Coates and Lacina Coulibaly. His description of the event seems to echo the performance-text interplay he explores in Epistrophies.

“The lecture starts out with me giving a talk about Emily and Lacina,” says Edwards, “but at a certain point they come up and take my place at the lectern — and I take off my shoes and start dancing!”

Epistrophies was chosen for the Truman Capote Award by an international panel of six prominent critics and writers, each of whom nominated two texts. Books of general literary criticism in English published during the last four years are eligible for nomination. After reading all the nominated books, each panel member ranked the nominees.

PAST WINNERS OF THE CAPOTE AWARD: