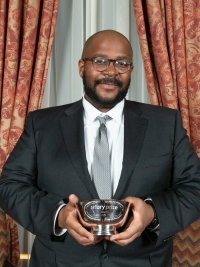 Workshop alumnus Brandon Taylor (MFA, 2019) was awarded the 2022 Story Prize last night, for his collection, Filthy Animals (Riverhead Books) . The prize was announced at a private event that was broadcast live, in a ceremony with authors Lily King for Five Tuesdays in Winter (Grove Press) and J. Robert Lennon for Think of Me (Graywolf Press), whose work was also honored.

Taylor’s first book, the novel Real Life, was a finalist for the Booker Prize. The Story Prize is his first major book award. Six of the eleven stories in Filthy Animals are connected by a group of common characters: Lionel, a PhD candidate in mathematics who has taken a leave of absence after a suicide attempt who encounters Charles and Sophie, two dancers in a complicated relationship that sometimes crosses over into outright cruelty toward each other and those they draw into their circle.

Director Larry Dark and Founder Julie Lindsey selected the three finalists for The Story Prize, now in its 19th year, from among 119 short story collections published in 2021, representing 90 different publishers or imprints. Three judges—librarian and writer Dev Aujla; critic, writer, and librarian David Kipen; and writer Kirstin Valdez Quade—determined the 18th winner of the prize from among the three books chosen as finalists.

Video recording of the Story Prize ceremony on YouTube