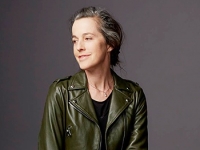 Congratulations to Workshop alumni Naomi Wallace and Zachary Lazar, recipients of 2015 Awards in Literature from the American Academy of Arts and Letters. The literature prizes honor both established and emerging writers of fiction, nonfiction, and poetry. The Academy’s 250 members nominate candidates, and a rotating committee of writers selects winners. This year’s committee members were John Guare, Philip Levine, Mark Strand, Joy Williams, and Charles Wright.

Playwright Naomi Wallace was one of eight writers to receive the Arts and Letters Awards in Literature, which honors "exceptional accomplishment in any genre." Wallace studied poetry writing at the Iowa Writers' Workshop and playwriting at the University of Iowa Playwrights Workshop. Her work has been produced in the United Kingdom, Europe and the United States. Her major plays include One Flea Spare, In the Heart of America, Slaughter City, The Trestle at Pope Lick Creek, Things of Dry Hours and The Fever Chart: Three Short Visions of the Middle East. Her work has received the Windham Campbell Prize, the Susan Smith Blackburn Prize, Kesselring Prize, Fellowship of Southern Writers Drama Award and an Obie. She is also a recipient of the MacArthur "Genius" Fellowship.

Novelist Zachary Lazar is the winner of the Academy's John Updike Award, which is given biennially to a mid-career writer whose work has demonstrated consistent excellence. Lazar is the author of four books, including the novel Sway, chosen as a Best Book of 2008 by The Los Angeles Times, Rolling Stone, Publishers Weekly, and Newsday, and the memoir, Evening's Empire: The Story of My Father's Murder, a Best Book of 2009 in The Chicago Tribune. His new novel is I Pity the Poor Immigrant (April, 2014).  Lazar is the recipient of a Guggenheim Fellowship and the Hodder Fellowship at Princeton University.

American Academy of Arts and Letters