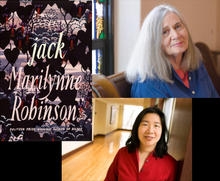 Please join Prairie Lights and the Iowa City Book Festival for an exciting reading with Marilynne Robinson, in conversation with Lan Samantha Chang.

Marilynne Robinson's new novel, Jack, is a New York Times Bestseller. Casey Cep of The New Yorker, says of the book, "Jack is the fourth novel in Robinson’s Gilead series, an intergenerational saga of race, religion, family, and forgiveness centered on a small Iowa town. But it is not accurate to call it a sequel or a prequel. Rather, this book and the others—Gilead, Home, and Lila—are more like the Gospels, telling the same story four different ways . . . At seventy-six, she is still trying to convince the rest of us that her habit of looking backward isn’t retrograde but radical, and that this country’s history, so often seen now as the source of our discontents, contains their remedy, too.”

Marilynne Robinson is the author of four novels, including Gilead, winner of the Pulitzer Prize for Fiction, Home, winner of the Orange Prize and the Los Angeles Times Book Prize, and Lila, winner of the National Book Critics Circle Award. Her first novel, Housekeeping, won the Hemingway Foundation/PEN Award. Robinson's nonfiction books include The Givenness of Things, When I Was a Child I Read Books, Absence of Mind, The Death of Adam, and Mother Country, which was nominated for a National Book Award. Her awards include the Library of Congress Prize for American Fiction, the Dayton Literary Peace Prize Richard C. Holbrooke Distinguished Achievement Award, the Orange Prize for Fiction, the National Book Critics Circle Award for Fiction, the PEN/Diamonstein-Spielvogel Award for the Art of the Essay, and the Louisville Gravemeyer Award in Religion. She was the recipient of a 2012 National Humanities Medal, awarded by President Barack Obama, for "her grace and intelligence in writing." She is currently Professor Emeritus at the Iowa Writers' Workshop.

She will be joined in conversation by Lan Samantha Chang, the author of a collection of short fiction, Hunger, and two novels, Inheritance, and All Is Forgotten, Nothing Is Lost. Her work has been translated into nine languages and has been chosen twice for The Best American Short Stories. She has received creative writing fellowships from Stanford University, Princeton University, the Radcliffe Institute for Advanced Study, the Guggenheim Foundation, and the National Endowment for the Arts. She is Program Director and Elizabeth M. Stanley Professor in the Arts at the Iowa Writers' Workshop.