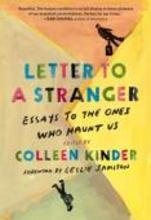 Please join us for a reading and discussion to celebrate the release of Letter to a Stranger: Essays to the Ones Who Haunt Us. Colleen Kinder, editor of the book, will be joined by a group of panelists featured in the collection including: Rachel Yoder, Erica Cavanagh, Lucas Mann, Lia Purpura, and Maggie Shipstead.

Library Review calls the  collection, “Sweet but often poignant collection . . . Mesmerizing . . . This highly recommended collection of letters would appeal to many types of readers, including individuals interested in creative writing, the epistolary form, or travel literature.”

Colleen Kinder has written essays and articles for The New York Times Magazine, The New Republic, Virginia Quarterly Review, The Wall Street Journal, A Public Space, Atlantic.com, Creative Nonfiction, AFAR, and Best American Travel Writing 2013. A graduate of the Iowa Nonfiction Writing Program, she has received fellowships from Yaddo, MacDowell, Djerassi, and the Fulbright. She is the cofounder of Off Assignment and teaches for Yale Summer Session in France.

Rachel Yoder is the author of the novel Nightbitch and a founding editor of draft: the journal of process. She lives in Iowa City with her husband and son.

Erica Cavanagh grew up in Rochester, NY, a place whose abolition and suffrage history deeply influence her interests and writing. During her Peace Corps service in Benin, she worked with women and children on access to education, health, and economic resources. Her nonfiction has appeared in The Missouri Review, North American Review, Bellevue Literary Review, The Journal, and elsewhere. She teaches creative nonfiction and food studies at James Madison University. She is also a graduate of the University of Iowa Nonfiction Writing Program.

Lucas Mann is the author of Class A: Baseball in the Middle of Everywhere, Lord Fear: A Memoir, and Captive Audience: On Love and Reality Television. His essays have appeared in The Washington Post, Guernica, BuzzFeed, and The Los Angeles Review of Books, among others. A recipient of fellowships from the National Endowment for the Arts and United States Artists, he teaches writing at the University of Massachusetts Dartmouth. He is also a graduate of the University of Iowa Nonfiction Writing Program.

Lia Purpura is the author of the essay collections All the Fierce Tethers, On Looking, Increase, and Rough Likeness, and the poetry collections It Shouldn’t Have Been Beautiful, King Baby, Stone Sky Lifting, and The Brighter the Veil. She has published poems and essays in Agni Magazine, Orion, The New Republic, The New Yorker, The Paris Review, and Ploughshares. A finalist for the National Book Critics Circle Award, she has been awarded fellowships from the NEA, the Fulbright, and the Guggenheim Foundation.

Maggie Shipstead is the author of Astonish Me and Seating Arrangements, which won the Dylan Thomas Prize and the L.A. Times Book Prize for First Fiction. She is a graduate of the Iowa Writers' Workshop and a former Wallace Stegner Fellow at Stanford. Her work has appeared in The New York Times, The Washington Post, the Guardian, The Wall Street Journal, Travel + Leisure, Departures, Condé Nast Traveler, Outside, The Best American Short Stories, and The Best American Sports Writing.