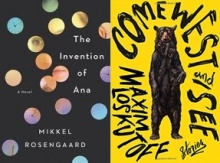 Mikkel Rosengaard and Maxim Loskutoff will read from their recent fiction. Mikkel Rosengaard will read from his novel The Invention of Ana. On a rooftop in Brooklyn one spring night, a young writer meets the intriguing artist and mathematician Ana Ivan, who confesses she is from a cursed Romanian lineage. “Mikkel Rosengaard’s intriguing first novel . . . weaves story upon story to explore . . . the bond between writer and muse.” —NYTBR  Rosengaard grew up in Elsinore, Denmark, and now lives in New York City.

Maxim Loskutoff will read from his story collection Come West and See. In an isolated region of Idaho, Montana, and eastern Oregon known as the Redoubt, an armed occupation of a wildlife refuge is escalating into civil war. Against this backdrop, twelve stories of ordinary lives explore the loneliness, fragility, and heartbreak inherent to love. “Devastating . . . grows increasingly bizarre and haunting until it’s left an indelible mark.”—New York Times

Loskutoff has been honored with the Nelson Algren Literary Award, a Global Writing Fellowship in Abu Dhabi, and the M Literary Fellowship in Bangalore. His stories have appeared in Ploughshares, Fiction, and the Southern Review. He lives in western Montana, where he was raised.