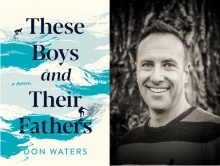 In 2010, Don Waters set out to write a magazine story about a surfing icon who had known his absentee father. It was an attempt to find a way of connecting to a man he never knew. He didn’t imagine that the story would become a years-long quest to understand a man who left behind almost nothing except for a self-absorbed autobiography for his abandoned son.

These Boys and Their Fathers touches on Waters’ early life with his single mother—and her string of dysfunctional men—and his later search for and encounters with his father, but it quickly expands into a gripping account of the life of a 1930s pulp writer, also named Don Waters, with whom Waters becomes obsessed. This wildly original book blends memoir, investigative reporting, and fiction to sort out difficult aspects of family, masculinity, and what it means to be a father.

Don Waters is the author of These Boys and Their Fathers, a memoir, Sunland, a novel, and two story collections, The Saints of Rattlesnake Mountain and Desert Gothic. His fiction has been widely published and anthologized in the Pushcart Prize, Best of the West, and New Stories from the Southwest. A frequent contributor to the San Francisco Chronicle, he’s also written for The New York Times, Outside, The Believer, Tin House, and Slate, among other publications. Waters is a graduate of the Iowa Writers’ Workshop, teaches at Lewis & Clark College, and lives in Portland, Oregon with his partner, the writer Robin Romm, and their daughters.