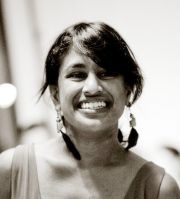 Vauhinia Vara (MFA 2010)  is an O. Henry Award-winning fiction writer whose short stories have been published in Tin House, Zyzzyva, Glimmer Train, and elsewhere. She earned a master’s degree from the Iowa Writers’ Workshop. For her fiction, she has been a fellow at the MacDowell Colony and a guest of the Yaddo Corporation.

She lives in San Francisco, were where is a business and technology correspondent for NewYorker.com, and previously, she worked as a reporter for the Wall Street Journal.

The recipient of journalism awards from the Samuel I. Newhouse Foundation, the Society of Professional Journalists, and the Northwest Journalists of Color, her journalistic work has been anthologized in Dogfight at the Pentagon, a 2014 collection of Page One features from the Wall Street Journal. Vauhini studied international relations at Stanford University. She sits on the MacDowell Fellows Executive Committee.

Could you tell us about your current fiction writing projects?

The novel is about a Steve Jobsian tech CEO.  It’s set in the near future.  He’s had a fall from grace because of a shadowy artificial intelligence project. The novel is narrated by an android/humanoid daughter.  (She’s technology-based.)

How do you approach female characters?  Are you conscious of how women are portrayed in your writing?

Absolutely. I like writing about female characters, particularly ones with concerns that go beyond the domestic. I consciously made the narrator female because she is this very adventurous character who strikes out and wants to change things.  I deliberately wanted that to be a female role.

Did you always know you wanted to be a writer?

When I was in middle school, I told my mom I wanted be a writer when I grew up and she said, “You should be a journalist instead of a novelist so you can make a living.”  She would probably deny ever saying that.  I was big reader when I was kid, and I always wanted to write.

In addition to your work as a fiction writer, you’ve had an impressive career as a journalist. Could you tell us more about your work?

I was at the Wall Street Journal for a long time, and I came to The New Yorker in 2013 to become the business editor for NewYorker.com. I was in New York for a year doing that and then I moved to San Francisco, where I write about business and Silicon Valley.

I started at the Wall Street Journal right after graduating from Stanford in 2004 and I left in 2008 to go to the Workshop, and then went back for three more years.  When I left the Journal to get an MFA, coworkers said, “Huh, that’s weird, she’s going to the Midwest.”  When I interviewed for The New Yorker, my boss called me and his first question was about the Writers’ Workshop.  That background was really valued. I applied and I got the job.

How did the Fellowship effect your writing life?

It did very much. Because I was leaving a job and because I’m not independently wealthy, it was really important for me to go to a program where I would be fully-funded.  That was really powerful when I got the letter. The Fellowship really made it possible for me to go to Iowa, and allowed me focus on writing, because it doesn’t require teaching.

I remember pulling up to Iowa with my boyfriend (now husband) and he said, “Here we are, now do what you’re here for.” We went to a coffee shop and wrote.  Focusing exclusively on writing rather than teaching was a big deal.

Do you think that female writers face special challenges today? How does the Rona Jaffe Foundation make a difference?

The challenges are well-documented. Women are under represented in literary magazines and book reviews in publications, et cetera, even though women are bigger readers and they are more than half the population.

On the flip side, because of the challenges, there has been an emergence of organizations that support women’s writing.  The Rona Jaffe is on the forefront of that with this fellowship and the other work they do.

The Rona Jaffe Foundation Graduate Fellowship was really instrumental for me and I feel really grateful.  I’ve since applied for other fellowships and when I apply for these things, I say I had the Rona Jaffe Fellowship and because everyone knows what it is, it has continued to help my career.

It’s money, and time to write, but less obvious was that it would be helpful as a writer beyond Iowa. (Also, going to Iowa was one of the best decisions of my life.)