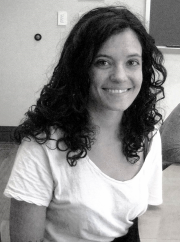 Delaney Nolan (MFA, 2016) is currently a second-year student at the Iowa Writers’ Workshop, and her writing has been published or is forthcoming in Guernica, Oxford American, The Rumpus, Ecotone, Vela, The South Carolina Review and The Chattahoochee Review. She is a former Bread Loaf work-study scholar and a Stanley Graduate Award recipient. Her work has been translated into Arabic, Italian, Bulgarian and Polish.

Could you talk about what you have been working on during your first year in the program?

I’m working on a collection of short stories that is largely about women in marginalized positions, mostly in the South, as I’m from North Carolina. The short story collection is mostly done.  I’m also working on a novel about a Gulf Coast city that has been allowed to flood but remain inhabited, vaguely based on New Orleans but also other towns.  The city is below sea level and has more of a symbiotic relationship with water—houses on stilts, roads become canals, et cetera.

And how do you approach female characters?

My approach to writing women changed a little while I was in Istanbul, which was where I was right before I came here. Gender roles there are very strong, and it made me more aware of how they operate here, where it’s just a little more subtle. It all made me more conscious of what it means to move through the world as a woman in a more vulnerable position.  As a result, I got more interested in confronting the small difficulties and micro-aggressions towards women, rather than obvious and immediately describable oppression. I try to do justice to a cultural atmosphere that affects what it means to be a woman in the world and in America. The world and the story come from the character, so once I know and have established who the character is, everything else falls out of that. Understanding the character is the largest part of the battle.

Being at Iowa is also great because there are so many strong feminist writers and a culture of people who are happy to listen to each other.

Do you have any thoughts, yet, about what you’d like to do after you graduate?

I’m applying for a Fulbright. I’m still in the very early stages of the application process but I’m looking at Iceland and Germany. Otherwise, I’d like to go back to New Orleans, and use I’ve learned from the Iowa Youth Writing Project. Through the IYWP, I volunteer in a treatment center for teenage girls. They are working through really serious issues and are so supportive of each other. That’s its own type of teaching, very different from in-class creative writing teaching. I’d like to try to establish a similar youth writing project in New Orleans.

Have you always wanted to be a writer?

I wrote my first story was when I was eight.  It was a story about a leprechaun who gets on a paper plane and goes on an adventure, but I never assumed I could be a writer, because it didn’t seem like a career where it was possible to make a living. It’s nice to be proven wrong, for at least a couple of years.

How did the Fellowship affect your writing life?

I was living in Istanbul and teaching and I basically wasn’t writing. Teaching third graders full time was really draining. When I got back from work, I didn’t have the energy to do anything productive. The Rona Jaffe Foundation Graduate Fellowship made it possible for me to quit my job and move here, but more importantly, it helped me realize that writing is my number one obligation. It allowed me to establish a routine and make sure I write every day.

Do you think that women writers face special challenges today?  How does the Rona Jaffe Foundation make a difference?

Yes. Definitely. You only have to look at the New York Times best sellers list and the authors who are getting interviewed.  It’s still a male-dominated field. When a woman pitches a nonfiction book, an agent might assume it is about a “young woman’s personal journey,” viewing it through a lens of being personal and soft and not as serious. It’s a matter of whose voices are viewed as valuable, and right now the male voice gets to be neutral, an objective voice, whereas a woman’s voice is always getting qualified. You’re not a writer, you’re a woman writer. You didn’t write a book, you wrote a woman’s book.

I think it also does come down to time and money—women still generally have more demands on their time and energy at home if they are starting a family.

It’s been really great to meet the other women in the Workshop and to participate in this network of writers that will continue to grow.  I didn’t have a woman reader before I came here, and now I have many. I hear that next year’s class will have more women than men, so that’s exciting. The Rona Jaffe Foundation Graduate Fellowship in Creative Writing has made a big difference to me.  It has been encouraging to know that there’s an organization out there that has my back and specifically looks out for women.